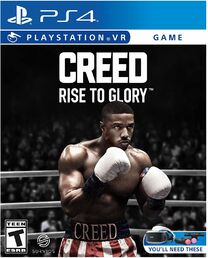 Like a high-profile title fight gearing up for the first bell, Survios’s Creed: Rise to Glory continues to grow with hype and anticipation leading up to its fall 2018 release. We’re thrilled to bring the cinematic drama of training with the legendary Rocky Balboa and duking it out with a variety of champions in the sport’s most renowned rings to PlayStation VR.

And at launch, PlayStation VR gets its own exclusive character truly worthy of a title bout. While you get to know the legendary Rocky Balboa as Creed’s gruff, streetwise trainer and mentor in both the acclaimed film and Creed: Rise to Glory’s Career Mode, he’s definitely retired from his days in the ring — until now. PlayStation VR players can experience a match only possible within the game: Play as Rocky Balboa in his youthful fighting prime.

A premier VR boxing experience that puts you in the gloves of Adonis Creed on his journey from an underground amateur to a spotlight champion, Creed: Rise to Glory features revolutionary Phantom Melee Technology for impactful melee combat VR. Whether you choose to live out Creed’s story or set up your own Exhibition battles against a variety of skilled opponents, this makes you feel every punch, uppercut, and flurry through situational desynchronization, including fatigue, staggering, and knockouts.

Ready to touch gloves as the Pride of Philadelphia? We’ll see you in the ring this fall on PlayStation VR!