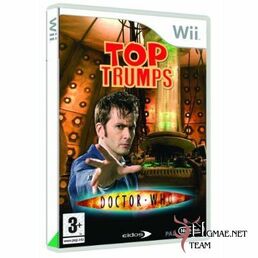 An amalgamation of two hugely successful brands, Top Trumps and Dr Who, Top Trumps: Dr Who for the Nintendo Wii offers fans of both a change to engage with a huge selection of characters, each with their own unique abilities and skills all set in a visual theme inspired by the animated series; Dr Who: Infinite Quest.

With 4 character cards exclusive to the Nintendo Wii release, now players use the unique Nintendo Wii controls to do galactic battle.

Think you know your Dr Who characters? Now is your chance to prove it and outwit your opponents.

* Each character has own unique ability such as Transportation, giving players a temporary advantage when their powers are at full strength.