Fight your way through an epic battle for survival in the prequel to 2008’s critically acclaimed Dead Space. The all-new Dead Space Extraction places you dead in the middle of the initial Necromorph invasion that threatens humanity. Find out how the terror began in this all-new action horror experience built especially for the Wii. Dead Space Extraction tells the untold story of the Aegis VII Colony through a handful of survivors battling to reach the orbiting USG Ishimura amidst a horrific infection. As their allies mysteriously fall victim to dementia, it becomes clear that protecting a young girl granting them a bizarre immunity may be their only hope for survival. In every shadow, behind every corner, terror hides – so you can’t. Fight the alien scourge alone or with a friend to blast apart oncoming Necromorphs, solve mind-bending puzzles, and defy all odds to reach safety. Feel the terror like never before in the most cinematic horror experience on the Wii. The end will be set in motion. 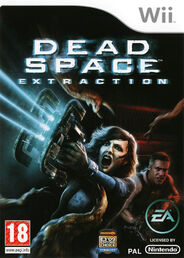