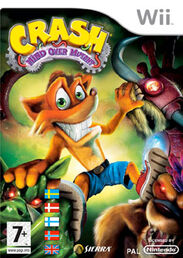 In Crash Bandicoot: Mind over Mutant, a rejuvenated Neo Cortex is taking over the world one brain at a time! Cortex and N. Brio devise a new kind of evil; a text-messaging, do-anything device which controls both mutant and bandicoot minds. Armed with his quick-wits and lightening agility, Crash must free his friends, the titans and save the day!

Monsters on Demand! – Not only does Crash keep the ability to control his enemies when he jacks them – now he can store his favorite monsters in his pocket, upgrade them and utilize their powers when they are most advantageous “Free-Romping” World Design – Wumpa Island is fully realized as a real location, with a “free-romping” design that allows players to travel and explore through intersecting worlds, with different gameplay options available depending on what creature you’ve brought along for the ride Girl Power! – Your co-op partner is Crash’s sister, Coco, playable for the first time in the cooperative mode. Not only does Coco make the game that much more inviting for girls to pick up and play, she also brings with her a new tactile “treasure hunt” ability New Abilities Roll-and Counter Combat System – Crash will have a fun, agile dodge move and “counter” move which will inflict extra damage on his enemies Digging – Crash can now dig underground as real-life bandicoots really do; this will allow for Crash to unlock bonus items Climbing – Crash can climb vertical surfaces and jump side-to-side to connected areas and dodge hazards