Crash of the Titans Wii 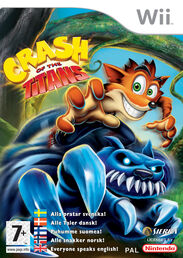 Crash of the Titans Wii

In a nefarious plot to unleash destruction, Crash’s arch-nemeses, Neo and Nina Cortex, have mutated the creatures of Crash’s island into monstrous abominations! Never one to shirk from danger, our orange furry friend finds that with his potent mix of wacky bravado and daredevil action he is able to hijack the titanic monsters and wield their immense powers against each other! Bring on the titans, because with Crash in charge, the bigger the baddie, the better!

Don’t beat 'em – Jack 'em! Control, play and BATTLE as 15 different outrageous and totally unique enemies, including Scorporilla, Ratcicle and Shellephant – multiple playable weapons! Use their special abilities, breathe fire and strike with earth-shaking attacks. Use one enemy as a weapon to blow away the others…and then collect their skins to replay a level with their powers! For the first time ever in a Crash game Crash now has a powerful acrobatic fighting system: punches and flying kicks, multiple attacks and special counter moves. Power up skills to unlock new attacks and blazing combos! Sure, he still spins, but now he’s got some serious moves to back it up! With an amazingly expanded moveset, Crash can now interact with his world in totally new ways. Climb trees, swing from ropes, flip off springboards – but that’s just part of the package. Crash can even toss Aku Aku on the ground and surf, skate, grind and shred. Ready for some Crash on Crash action? That’s right – it’s twice the Crash! At any point in the game get your buddy to join in and play as Carbon-Crash, and work together to unleash total chaos! Crash can even jack Carbon-Crash (or vice versa) for some hysterical Crash/jacked-Crash mayhem!!!

The Quarry Xbox One