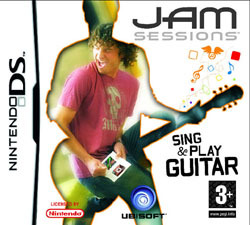 Players will rock out, or smoothly strum, on the lower screen of the Nintendo DS system, producing an authentic sound digitally remastered from an actual acoustic guitar.

The simple interface will guide players into the various easy-to-play modes which include: Performance Mode, allowing users to sing and play along both yesterday and today’s hottest artists; Free-Play Mode, where people can play anything they chose; and Tutorial Mode where novice musicians will learn to play guitar without paying for lessons.

One of the most compelling features is the ability to record what you play and play it back, therefore making Jam Sessions virtual notepad for players to write, play and save their original music anytime, anywhere. The portability of the DS system makes Jam Sessions a complete concert-on-the-go entertainment system, perfect for parties and other social gatherings – simply hook up some external speakers via the headphone jack and you’re a rock star!