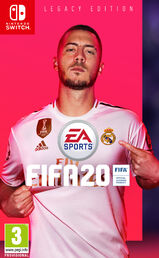 The EA SPORTS™ FIFA 20 Legacy Edition launches September 27th on Nintendo Switch™ featuring the latest kits, clubs, and squads from some of top leagues around the world. It will also feature some of the world’s most famous stadiums, including a number brand new to FIFA 20.