In Watch Dogs Legion for Xbox One, it’s time to take back London, and virtually anyone you see in this iconic city can be recruited to your resistance. The people are being oppressed by corrupt opportunists and it’s up to you to build a resistance to give the city back to the people.

Availability
This product will start shipping on 31.12.2020 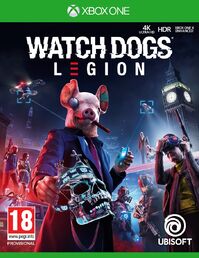 Play as anyone. Every individual you meet in the open world of Watch Dogs Legion for Xbox One, has a full set of animations, voice over, character traits and visuals that are generated & guided by gameplay systems.

Watch_Dogs Legion is set in a near-future, dystopian version of London. It’s a post-Brexit world in which society, politics and technology have changed and altered London’s fortunes. London is one of the most iconic cities in the world and has had a massive influence on all of Western Culture for centuries… London makes total sense for WD, as the city has one of the highest surveillance levels in the world making this the perfect playground.

With an entire population of potential recruits and the city’s technology at your fingertips, you’ll need to hack, infiltrate, and fight your way to a liberated London. Welcome to the Resistance.