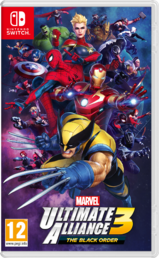 For the first time in 10 years, the MARVEL ULTIMATE ALLIANCE series returns with four-player action and an original story … all exclusive to Nintendo Switch! Assemble your dream team from a huge cast of Super Heroes, including Marvel’s ultimate cosmic protector, Captain Marvel. Players can save the world together with up to four players** in TV mode, with four separate systems locally or online. A dynamic zoomed-in Heroic Camera will give players the option to get closer to the action. As characters level up, they’ll learn new skills they can use on the fly, and also perform powerful Alliance Extreme attacks. MARVEL ULTIMATE ALLIANCE 3: The Black Order launches for Nintendo Switch this summer.