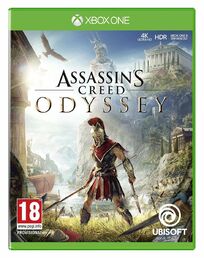 Assassin’s Creed Odyssey is an ambitious action role-playing game that places choice at the center of the experience. An all-new interactive dialogue system empowers players to forge their own path and impact the game’s world, characters and story to shape the future of Greece. Players will customize weapons and gear, master and equip new special abilities, and charge into massive battles between Sparta and Athens, pitting hundreds of soldiers against each other. The return of open-world naval combat allows players to seamlessly explore the open seas, customize their ship and recruit their own crew with unique perks. With the entire country of Greece to discover, from pristine beaches to vibrant cities, from the heights of snowy mountain peaks to the depths of the Aegean Sea, players will encounter Ancient Greece’s famous figures and myths as they live their own odyssey.