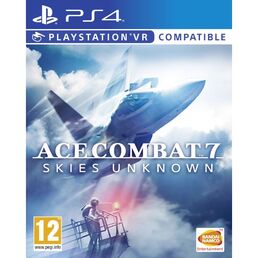 Strap yourself into the cockpit of some of the worlds most formidable fighter planes and skim through the clouds embarking on daring aerial stunts and nerve-shredding tactical dogfights.

In Ace Combat 7, you take on the role of an Ace an elite fighter pilot tasked with patrolling the most open and intimidating space on Earth: the sky. Choose from an array of authentic modern and futurist aircraft and load them up with an arsenal of cutting-edge super weapons as unfolding events drive you into ever more dangerous aerial face-offs.

PlayStation VR support will allow you to actually climb inside the cockpit with a series of exclusive features that create a new level of death-defying immersion.