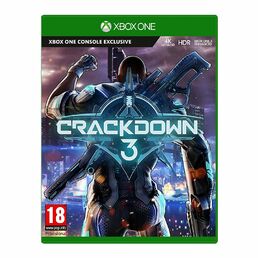 Honoring the classic, open-world Crackdown experience adored by fans, Crackdown 3 is bringing you a 4-person co-operative campaign enhanced with a new dynamic story, cutting-edge weapons and vehicles, enemies you’ll love to hate – and of course, tons of orbs to collect!

Crackdown 3 will also deliver a groundbreaking competitive multiplayer mode, where everything is physical thanks to the Microsoft Cloud. Harness 20 times the power of your Xbox One to unleash 100 percent destructible environments for the first time ever in gaming and create your own explosive stories in the process.

Developed by Dave Jones and his UK-based studio Reagent Games – the minds behind the original Crackdown and Grand Theft Auto – fans can expect a revolutionary open-world playground in Crackdown 3.

Whether you play Crackdown 3 for its entirely new campaign or its revolutionary multiplayer, one thing is for sure: you’ll never look at an open-world experience the same way again!

Devil May Cry 5 Xbox One

The Division 2 Xbox One

Gears of War 4 Xbox One