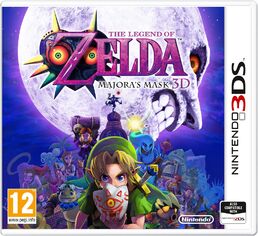 Majora’s Mask, a “dark departure from the Zelda formula” that was originally released in 2000, sends Link on a time-traveling adventure in an attempt to stop the moon of the land Termina from crashing into the planet. The game was a follow-up to seminal Zelda adventure The Legend of Zelda: Ocarina of Time, which Nintendo remade for 3DS in 2011.

Dragon Quest VII: Fragments of the Forgotten Past 3DS