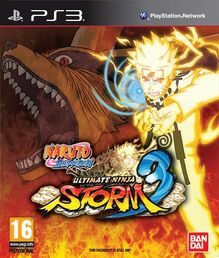 The critically acclaimed Naruto Shippuden Ultimate Ninja STORM series is back in 2013 on PS3 and X360, celebrating the return of highly awaited boss battles and welcoming brand new features to revamp the game experience.

Introducing masked Man and Nine-Tails assault on the Leaf Village for the first time in a video game, the story mode will let you live the most recent events of the anime with a degree of faithfulness never-before-seen.

* Absolute immersion: Naruto Ultimate Ninja STORM 3 scales up all you knew to offer you the most immersive and epic Naruto game ever created.
* Nine-Tails attacks Konoha: Story mode starts out with the heated invasion of Nine-Tails! Help Hiruzen and Minato to defend the village against Masked Man and Nine-Tails.
* Bigger Scale Boss Battles: Boss Battles are back and more impressive than ever depicted. Prepare to involve the entire village in a huge boss battle with Nine-Tails.

Naruto Shippuden: Ultimate Ninja Storm 3 will feature the most extensive character roster of any game so far in the series, letting fans engage with a huge number of their favorite personalities from the series, be they friend or foe. In story mode, players will be thrown into a series of thrilling adventures set in the village of Konoha, while the game’s electrifying fights will be punctuated with massive scale boss battles, including a fearsome confrontation with the gargantuan Nine-Tails.