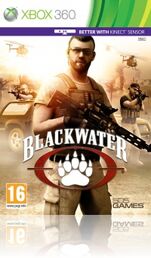 Blackwater takes virtual combat to the next level, using Kinect™ for Xbox to create an unprecedented new level of battle immersion.

Just like a real-life Blackwater operative, players must use military tactics and full body gestures to complete high-stakes assignments in some of the most dangerous places on the planet.

Kinect or Traditional Controllers: Be the first to take on the next generation of third-person shooters, as you use your entire body to fully immerse yourself in the action – or use traditional controls for a more conventional gaming experience.

More than 25 different Kinect moves: From shooting to ducking, throwing grenades or protecting VIPs, use the full range of body moves and expertise vital to be a professional operator.

Blackwater Team: Play as four different members of the Blackwater Team, each with a military specialization such as: tactics, demolition, weapons and assassination.