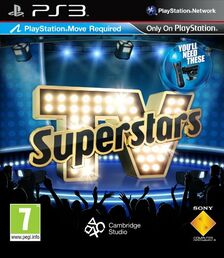 Do you have what it takes to become the next big superstar? Experience the fame, the glitz and the glamour as you become the ultimate reality celebrity in TV Superstars, a fun new social party game designed specifically for the PlayStation  Move. Utilizing the PlayStation Eye’s face-capture technology, players are placed center stage in starring roles and compete against other contestants in a series of action-packed reality themed TV shows. Striving to earn popularity and fame in the race to top of the A-list, get ready to strut your stuff and model on the red carpet, perform daring stunts in a chaotic game show, makeover celebrity homes, and much more.

* Star in five reality style TV shows as you work your way up to super stardom – FrockStar, D.I.Y. Raw, Big Beat Kitchen, Super Television Acting Agency, and Let’s Get Physical.
* Win challenges to gain popularity and fame. The more famous you become, the more lucrative product endorsements and commercial deals you’ll score.
* As fans follow your every move, track your own popularity through appearances in tabloid magazines.
* Perform a variety of dynamic PlayStation®Move actions with 1:1 motion tracking that puts you in the game like never before.
* The PlayStation Eye captures your image and facial expression so you become the star of the show, creating your own personalized character in the game.